According to Bullhorn data, 81 percent of agencies increased placements in 2015

Recruitment agencies in the Asia-Pacific region are feeling confident after some solid performances in the past year. Repeat business is expected to play a strong role in driving growth and overall, agencies believe 2016 will prove to be a stronger year than 2015. These figures are derived from Bullhorn data captured throughout 2016, with input from more than 170 recruitment businesses across the region. Here are some of the highlights.

Building on Past Performance

Repeat business is expected to play an important role in this continued growth. 78 percent of respondents said that at least half of their revenue would come from repeat business. Out of the major recruitment metrics, total number of placements is ranked as most important when it comes to driving revenue. Average placement fee/bill rate is second, and total number of job orders is third.

To understand more about the focus and location of these recruitment agencies, let’s take a look at the demographics profile.

The majority of respondents were located in Australia, with 61 percent. Next came Singapore, at 9 percent; New Zealand, 8 percent; India, 6 percent, Japan, 5 percent; and Hong Kong at 3 percent.

The most popular industry reported by respondents was technology, at 27 percent. Next was business services, at 23 percent; and construction, at 20 percent. Financial/insurance recruitment came in at 19 percent, as did manufacturing. Healthcare notched only 16 percent.

Learn more about how leading recruitment companies are using modern technology to grow their businesses.

If you enjoyed this post and want to learn more, take a look at our other two instalments of APAC recruitment trends: 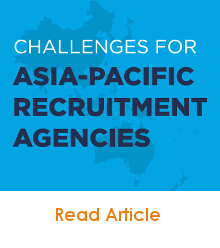 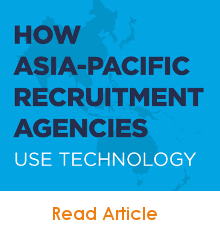 All Resources
Tips, Tricks, and How-Tos

Connected Recruiting: Where To Start (And How To Get Results)

Hear from a panel of recruitment technology experts on creating a consistently engaged talent pool with Connected Recruiting.

What Is Connected Recruiting?

How Employers Can Turn the Great Resignation Into Opportunity

The New World of Work – What Does it Mean for APAC Recruiters?

4 Recruiting Tools that Will Improve Your Workflow (and Why)

Connected Recruiting: Where To Start (And How To Get Results)

What Is Connected Recruiting?

How Employers Can Turn the Great Resignation Into Opportunity

The New World of Work – What Does it Mean for APAC Recruiters?

4 Recruiting Tools that Will Improve Your Workflow (and Why)